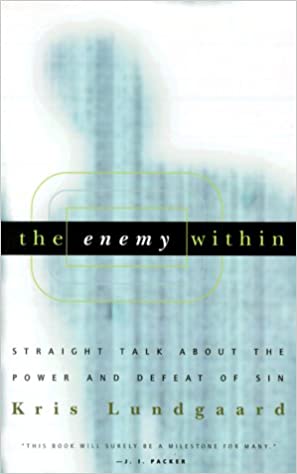 You and I have an enemy within us. Our flesh fights against us and leads us into sin. We must kill it! This book can help. The Christian life is about becoming more like Jesus Christ everyday. Jesus was perfect, righteous and holy. He never sinned. We on the other hand sin often. The Christian life is a an ongoing battle against sin. We put off the old and put on the new. Christian maturity is about the process of putting sin to death and striving for holiness. The war will last the rest of our earthly days, but we are not fighting it alone. We have been given the Spirit of God Himself. He is at work within us. He is also given us a weapon for the fight which is the Word of God. Sadly many Christians neglect the power and weapon that is available to them.

Probably the most helpful writing on the topic was penned about 300 years ago by John Owen. His works Indwelling Sin, The Mortification of Sin and Treatise on Temptation have become Christian classics. They are a very challenging read and have been recently combined and updated into more modern English under the title Overcoming Sin and Temptation. Owen’s writings are a boot camp that will prepare you to fight sin. To make this treasure of wisdom even more accessible an author has done a modern rewriting and abbreviation of Owen’s books. The Enemy Within: Straight Talk About the Power and Defeat of Sin by Kris Lundgaard is a little book that I believe every Christian should read. It is filled with practical ways to gain victory over the sin that so easily entangles us. I have read this short book many times and keep coming back to it because I have found it extremely helpful in my own fight against sin and is a practical guide to introduce others to the raging battle. It is an easy read, but it is about a difficult fight. I want to strongly encourage you to prayerfully read through this book. Better yet, find someone to read it with. Look up every scripture referenced and think deeply on the implications of each text. It will do you good. The following are some of my favorite quotes from the book.

“In your struggle against sin, never forget your duty—but neither forget the power of the Spirit. The killing of the flesh is your duty, but His work.”

“The law of sin and the law of the Spirit of life (Romans 8:2) in us are mortal enemies. If we are not spiritually wise in managing our souls, how can we help making a wreck of ourselves? But many people live in darkness and ignorance about their own hearts. They keep careful track of how their investments are doing on Wall Street and get frequent checkups at the doctor; they watch what they eat and work out at the gym three or four times a week to keep their bodies finely tuned. But how many people give the least thought to their souls? If it is important to watch over and care for our bodies and investments, which will soon die and rot, how much more important is it for us to guard our immortal souls?”

“There is no spiritual duty, nothing godly you can set yourself to, in which you won’t feel the wind of sin’s resistance in your face.”

“If sin only came to visit now and then, like an unwelcome in-law, we could get a lot of godliness done while it was away. If it were like an army that struck, then pulled back for a time, we could refresh ourselves and fortify our defenses during the calm. But the flesh is a relentless homebody and assailant. Wherever you go, whatever you do, the law of sin is with you step for step—in the best you do, in the worst you do. Sin isn’t just a permanent houseguest; it’s a meddlesome wretch. It’s always poking its nose in, looking over your shoulder, whispering in your ear.”

“Never think for a minute that the war against sin is over in this life. There isn’t even a cease-fire. Many generals have been surprised because they were careless after a victory. Countless believers have been ambushed on the heels of a giant step forward in faith. David, for example, lived a long life of devotion and duty to God, and saw mercy on mercy from God’s hands; then sin tip-toed up behind him in the dark and stabbed him in the back... Sin can be like trick birthday candles: you blow them out and smile, thinking you have your wish; then your jaw drops as they burst into flames.”

“The more you discover the power of indwelling sin, the less you will suffer its effects. Because the better you know it, the more you will hate it; and to the length that you abhor it—and no farther—you will grasp for grace against it.”

“As endless and complicated as this war is, believers rush in with confidence: the Holy Spirit takes the horror out of the horror show. We don’t know our hearts, but he does (Psalm 139). He is a blazing torch we carry into the haunted house, and he ferrets out the monsters. He leads us into a closet under the stairs and uncovers a seething hatred. He shines under the bed and exposes a sniveling lust. No sin escapes his searching eye.”

“The deceiver disguises what is undesirable and harmful (the hook in the fishing lure, for example) beneath what he thinks we want (a brightly colored fly, if you’re a fish). He hides from our minds the painful consequences we ought to consider (if you bite the hook, you’ll be captured, cleaned, and cooked), so that we make a false judgment… When the flesh deceives you, you will sin.”

“Besides belittling sin, the flesh uses its wiles to drive every thought of God from our minds by filling the mind with thoughts of the world. The flesh knows a mind cannot be fixed on both God and earthly things (Col 3:2; 1 John 2:15). The main ploy of the flesh is to slip worldliness into the mind under the guise of necessity.”

“Our mind must stay fixed on God, especially on his grace and goodness toward us. His love propels, fuels, drives us to obey. It is the fountain of our obedience, and our highest motive to finding out what pleases the Lord and doing it.”

“The flesh weakens conviction against sin by separating the remedy of grace from the design of grace. The Scriptures teach nothing more clearly than that God’s design in showing mercy is to make us holy people… The flesh works to make you forget the design (that you are saved to be holy) and think only of the remedy (if you sin you’ll be forgiven). The flesh preaches half a gospel (a twisted gospel) to us: “Go ahead and indulge—it’s already paid for.” Those who fall prey to such deception are evidently many, since the Scriptures go to such lengths to condemn it (Rom 3:5–8; 6:1–4; Jude 4)… If your mind sees the gospel only as a source of pardon from sin, and not also as the source of deliverance from the power of sin, you will be more easily attracted by the pleasures of sin, convinced that any threats of danger have been carried away in Christ.”

“The deceitfulness of the flesh says, “You ought to pray, so pray; you ought to tithe, so tithe; now you’ve done your duty, so go and do what you want.”

“The flesh wants to fix your imagination on something that will lead you into the clutches of sin. It wants you to dwell on and savor those tantalizing possibilities, until you can’t stop thinking about them, until you start plotting and scheming ways to make the fantasy a reality. This is why Paul warns us not even to “think about how to gratify the desires of the flesh” (Rom 13:14).”

“Think greatly of God’s greatness. Thoughts that reach up toward the excellency of God’s majesty are beautiful and delicious to the soul, but they come with unpleasant side effects. Even a hint of his greatness shows us up as grasshoppers, dust, and “less than nothing” in comparison (Isaiah 40:12–25). No one wants to go out of his way to feel small, weak, and defiled; but this strong medicine gives us hope against sin. In this humiliation our sin withers.”

“Will you give your hours to fantasizing about and dwelling on and longing for the vile things that nailed the Lover of your soul to the cursed tree? Set your heart on heavenly things! How often do you fantasize about the resurrection? Reigning with Christ forever? Joining your voice in worship to the saints in heaven?”

“In every individual sinful thought, word, action, or feeling, God’s grace fights against the will’s consent. Just as the flesh resists every spiritual act, the Spirit resists every sin. The wisdom of the believer is to learn to listen to the voice of the Spirit’s resistance, no matter how faintly it may echo in the conscience. The folly of the believer is to ignore that voice repeatedly, until he becomes nearly deaf to it. This is greasing the tracks for sin.””

“The Great Physician has warned us. Killing the flesh is expensive (it will cost us much work and time, though aided by the Spirit), but the alternative is spiritual death. Those who refuse to put the flesh to death are willing to live according to the flesh. This is consent to sin. So it is not necessary to plan to murder or lust or steal or lie in order to give your consent to sin. All you have to do is willingly neglect the means God has given to put an end to sin.”

“All the deception and temptation of the flesh has one intent: to convince the mind that this sinful act is somehow “good” for the soul so that you hunger for it, and your will chooses it. The ways the flesh does this are countless.”

“Your mind can only protect against the deceit of the flesh if you are cross-eyed. That is, you can only keep the rottenness of sin and the kindness of God in mind if you fix your eyes on the cross. What shows God’s hatred of sin more than the cross?”

“If you don’t imbed it in your mind that prayer and meditation are indispensable, and seek God’s grace every day to resist the sluggishness of your body, you will hit the snooze button all morning rather than kneel before the throne.”

“Do you work hard to get a glimpse of the glory of God each day as you approach him? … The Scriptures are our only infallible guide for filling our minds and hearts with thoughts of God.”

Previous
Look at the Book
Next
What is the Gospel?