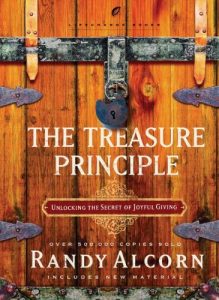 Jesus spent more time talking about money and possessions than about Heaven and Hell combined. But too often we’ve overlooked or misunderstood His most profound teaching on this topic. Jesus offers us life-changing investment advice. He actually wants us to store up treasures for ourselves—just not here on Earth. Instead, Jesus urges us to store our treasure in Heaven, where they will await us, and last forever. We can’t take it with us—but we can send it on ahead!

Randy Alcorn’s little book The Treasure Principle: Unlocking the Secret of Joyful Giving is pure gold. It’s more than worth reading, it’s worth putting into practice! He concisely looks at the Bibles teaching regarding financial stewardship and reveal something both profound and simple all at once.

Below are a handful of my favorite quotes from the book.

You can’t take it with you, but you can send it on ahead. Anything we try to hang on to here will be lost. But anything we put into God’s hands will be ours for eternity. If that doesn’t take your breath away, you don’t understand it! According to Jesus, storing up earthly treasures isn’t simply wrong. It’s just plain stupid. If we invest in the eternal instead of in the temporal, we store up treasures in Heaven that will never stop paying dividends.  (Matthew 6:19-21; Psalm 49:16–17)

John D. Rockefeller was one of the wealthiest men who ever lived. After he died, someone asked his accountant, “How much money did John leave?” The reply was classic: “He left…all of it.”

“A steward manages assets for the owner’s benefit. He carries no sense of entitlement to the assets he manages. It’s his job to find out what the owner wants done with his assets, then to carry out his will. Whenever we think like owners, it’s a red flag. We should be thinking like stewards, investment managers, always looking for the best place to invest the Owner’s money. Our name is on God’s account. We have unrestricted access to it, but we shouldn’t hoard or indiscriminately spend the excess. After all, it’s His, not ours.”

Giving isn’t a luxury of the rich. It’s a joyous privilege of the poor. When we’re not givers, it means we’re not being permeated by His grace and the joy that’s inseparable from it.

“Giving brings freedom. It’s a matter of physics. The greater the mass, the greater the hold that mass exerts. The more things we own—the greater their total mass—the more they pull us into orbit around them. Finally, like a black hole, they suck us in. Giving breaks us out of the orbit around our possessions. We escape their gravity, entering a new orbit around Heaven, the residence of our King Jesus, where we’ve invested our treasures.”

“The care of $200 million is enough to kill anyone. There is no pleasure in it.” —W. H. VANDERBILT

“I have made many millions, but they have brought me no happiness.” —JOHN D. ROCKEFELLER

“I was happier when doing a mechanic’s job.” —HENRY FORD

“We think we own our possessions, but too often they own us. Nothing makes a journey more difficult than a heavy backpack filled with nice but unnecessary things. Pilgrims travel light.”

How can you lead the way in the journey of generosity? Why not set a figure you can live on, then tell God that everything He provides beyond that amount you’ll give back to Him? When you do that, the desire to make more money takes on a kingdom purpose. It’s transformed into a desire to help others more and expand God’s kingdom!

“By all means, do your estate planning, and give substantially to God’s kingdom. But what kind of conviction does it take to part with your money once you die? You’ll have no choice! Death isn’t your best opportunity to give; it’s the end of your opportunity to give.”

John Wesley said, “Money never stays with me. It would burn me if it did. I throw it out of my hands as soon as possible, lest it should find its way into my heart.”

“The American dream is to die with as many cards in your hand as possible. But maybe we’ve got it backward. Maybe our strategy should be more like those card games where the winner is the one who runs out of cards first. At the end of the game, the cards left aren’t an asset, but a liability.”

Have you ever asked yourself, Why has He provided so much? You don’t need to wonder. Paul tells us exactly why: Now He who supplies seed to the sower and bread for food will also supply and increase your store of seed and will enlarge the harvest of your righteousness. You will be made rich in every way so that you can be generous on every occasion.” (2 Corinthians 9:10-11)

Suppose you have something important you want to get to someone who needs it. You wrap it up and hand it over to the FedEx guy. What would you think if instead of delivering the package, he took it home, opened it, and kept it? You’d say, “The package doesn’t belong to him! He’s the middleman. His job is to get it from me to the person it’s intended for.” Just because God puts His money in our hands doesn’t mean He intends for it to stay there!

Previous
Evangelism: How the Whole Church Speaks of Jesus
Next
What should you Trust?